European Union Leaders Agree Brexit Deal - So What Are Your Supply Chain Risks?

As stated by Donald Tusk, President of the European Council, the UK’s withdrawal agreement from the European Union has been approved, now the question is does Brexit represent a supply chain risk to be mitigated, or a supply chain opportunity to be exploited?

As reported by the BBC, the UK’s withdrawal agreement from the European Union has been approved by EU leaders, its chief official Donald Tusk has announced.

The 27 leaders gave it their backing after less than an hour's discussion in Brussels.

Mr. Tusk signaled on Saturday that the deal would be approved after Spain withdrew last-minute concerns over Gibraltar.

The deal needs to be approved by the UK Parliament, with many MPs opposed.

Mr. Tusk, the president of the European Council, broke the news on Twitter.

Brexit: A Simple Guide to the UK Leaving the EU

Yossi Sheffi from the MIT Center for Transportation & Logistics wrote; the United Kingdom’s tortuous withdrawal from the European Union appears to be headed for a hard landing.

Instead of leaving the EU in an orderly fashion, the country could be unceremoniously dumped outside the door.

The experience is delivering some harsh lessons for the UK – and for other countries including the United States.

Chief among them is that a Brexit-scale disruption can shatter product delivery schedules that are finely attuned to lean manufacturing principles. If the divorce is messy and acrimonious, the shock waves will reverberate for some time and leave crippled or destroyed companies in their wake.

As the Wall Street Journal reported recently, a survey of 1,310 supply chain managers in Europe carried out by the Chartered Institute of Procurement & Supply finds that one in 10 company executives in the UK fear that their enterprises could go bankrupt if Brexit causes Customs delays of just 10 to 30 minutes.

If delays of one to three hours or 12 to 24 hours become the norm, 14% and 15% respectively of the UK businesses surveyed expect to go under.

These findings provide a stark reminder of just how vulnerable international supply chains are to interruptions to the free flow of goods.

The survey responses also highlight the importance of risk management in supply chains – and how political uncertainty can paralyze companies.

Sheffi describes in his blog post, How to Prepare for a Brexit-Style Disruption, there are a number of risk mitigation measures companies can put in place to prepare for this type of crisis. And the survey respondents indicate that companies are implementing some measures.

For example, 23% of companies plan to stockpile goods, and many enterprises are looking to build more flexibility into supply contracts with European customers.

But absent a political agreement or effective exit plan, companies are understandably cautious about committing too much money to expensive actions such as paying for additional product storage space.

"If the divorce is messy the supply chain shock wave will reverberate for some time"Dr. Yossi Sheffi, MIT Center for Transportation & Logistics

Moreover, the decision is becoming more difficult by the day as the political impasse continues and related costs increase. Hubris also is playing a part in preventing the Brits from preparing properly for a disorderly exit.

A recent article in The Economist provides a no-nonsense account of this pitfall. British Prime Minister Theresa May has taken the line that “no deal is better than a bad deal” in an attempt to convince the EU that the UK is quite prepared to walk away from an unsatisfactory agreement. The country’s citizenry has taken this cue, and attitudes towards a negotiated settlement have hardened.

But as The Economist points out, this is not like buying a car where a buyer can simply walk away from a lemon. Like it or not, the UK is due to officially leave the EU at the end of March 2019, and if it does not have an acceptable agreement in place the consequences will be dire.

Meanwhile, the misguided belief that the country can simply vacate the table and go its own way has taken some of the urgency out of the preparations that need to be mad

Populism also has dampened the urgency of the situation. Anxieties over unbridled immigration – expertly fanned by the pro-Brexit lobby – are at the root of the country’s decision to leave the EU. But populist arguments – especially with regard to immigration – appeal to emotion, not common sense, and tend to distort the true nature of important decisions and their real-world consequences. For example, already there are reports of labor shortages in Britain’s agricultural sector as sources of immigrant labor dry up.

Many of these ramifications are familiar in the United States, where the populist machine has been running at full throttle and where there are now more job openings than job seekers. US retailers are already fretting about the lack of workers in the logistics industry in preparation for the holiday rush, despite large salary increases for truck drivers and warehouse workers. And Americans should not assume that they are immune from this spat on the other side of the Atlantic Ocean.

When the UK tears itself away from the EU, the implications for global supply chains and global geopolitical alignments are likely to be far-reaching.

The Brexit debacle is not only a self-inflicted crisis in the UK and Europe, but it is also a symptom of broader political and economic maladies that affect us all.

Theresa May got the first green light for her Brexit agreement at the weekend when the remaining 27 EU countries voted to endorse its terms.

Afterward, European Commission President Jean-Claude Juncker said that it is "the best deal possible for Britain". According to a new analysis by the National Institute for Economic and Social Research though, the 'best' deal is far from a good one for the UK. 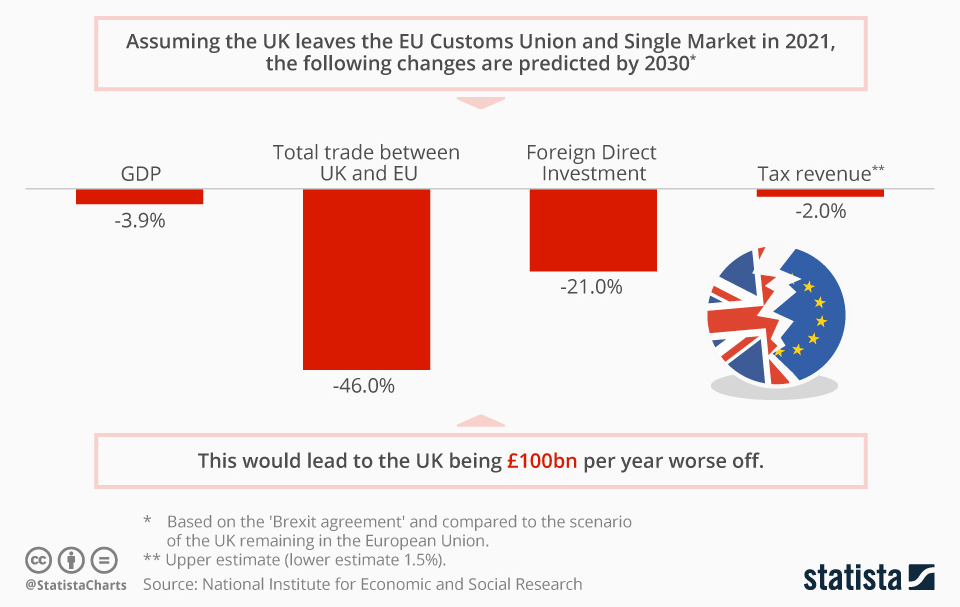 Assuming the UK leaves the EU Customs Union and Single Market in 2021 under the now approved agreement, by 2030, the country's economy is forecast to be £100bn per year worse off.

This would be chiefly due to the predicted 3.9 percent fall in GDP, a drastic reduction in trade with the remaining EU states of 46 percent, a drop of 21 percent in foreign direct investment and a potential loss of 2 percent in tax revenue.

The surprising outcome of the 2016 referendum on European Union (EU) Membership for the United Kingdom (UK) has led to a complex process of withdrawal that is estimated to take two years.

This vote to leave the EU will cause political and economic changes and impact free trade agreements, regulatory frameworks, workforce availability, currencies, and investments.

These effects must be evaluated by any company doing global business but especially in the UK and Europe.

No doubt companies whose supply chains flow through the UK may be affected, but fortunately and, unlike most supply chain disruptions, we have had time to plan for this complex change.

So the question remains, are you and your supply chain ready for the risks of Brexit?