China’s Xi gets tougher on Trump after new tariff threat 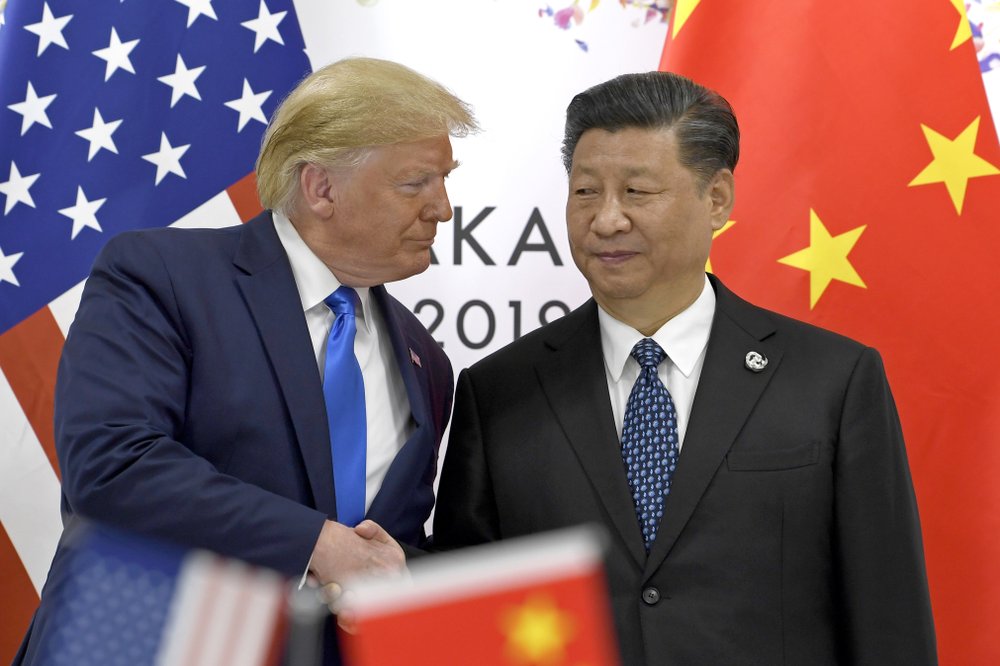 FILE - In this June 29, 2019, file photo, U.S. President Donald Trump, left, shakes hands with Chinese President Xi Jinping during a meeting on the sidelines of the G-20 summit in Osaka, western Japan. Facing another U.S. tariff hike, Xi is getting tougher with Washington instead of backing down. Both sides have incentives to settle a trade war that is battering exporters on either side of the Pacific and threatening to tip the global economy into recession. (AP Photo/Susan Walsh, File)

Facing another U.S. tariff hike, Chinese President Xi Jinping is getting tougher with Washington instead of backing down.

Beijing fired what economists called a “warning shot” at Washington by letting its yuan currency weaken in response to President Donald Trump’s latest threat of more punitive import duties on Sept. 1. Chinese buyers canceled multibillion-dollar purchases of U.S. soybeans. Regulators are threatening to place American companies on an “unreliable entities” list that might face curbs on their operations.

Both sides have incentives to settle a trade war that is battering exporters on either side of the Pacific and threatening to tip the global economy into recession. But Xi’s government is lashing out and might be, in a revival of traditional Chinese strategy, settling in for prolonged wrangling in response to what it deems American bullying and attempts to handicap China’s economic development.

On Tuesday, though, the Trump administration may have eased frictions at least slightly when it announced that it would soften the impact of the 10% tariffs it had said would begin Sept. 1 on the $300 billion in Chinese goods it hasn’t already taxed. It will delay until Dec. 15 the tariffs on cellphones, laptop computers, video game consoles, some toys, computer monitors and some shoes and clothing.

Negotiators are to meet in September in Washington, but China’s political calendar makes progress unlikely. The ruling Communist Party is preparing to celebrate its 70th anniversary in power on Oct. 1 — a nationalism-drenched milestone that puts pressure on Xi, the party leader, to look tough.

Six months ago, Chinese negotiators were discussing possible concessions, including more purchases of American farm goods, market opening and changes in business rules. But by May, Chinese leaders had turned skittish in the face of what they saw as constantly shifting American priorities on a list of demands that range from narrowing their trade surplus to opening markets to possibly scrapping their economic development strategy.

Talks broke down in May over how to enforce any settlement. Beijing says once it takes effect, Trump has to lift punitive 25% tariffs imposed on $250 billion of Chinese imports. Washington insists the tariffs stay to enforce compliance because Beijing has broken too many past promises.

“Good faith broke down and we took many steps backward,” said Bryan Mercurio, a former Canadian trade official and law professor at the Chinese University of Hong Kong.

Despite a June agreement by Trump and Xi for more negotiation, neither has shown willingness to compromise. A round of talks in Shanghai last month ended with no sign of progress.

Trump says Beijing needs a deal more than he does. On paper, he is right. Their lopsided trade balance means American demand contributes four times as much to Chinese economic activity as China’s purchases provide for the United States.

But Trump’s demand for changes to Beijing’s industrial policy strikes at the heart of a development strategy Communist leaders see as the basis of their economic success and a path to prosperity and global influence.

That includes initiatives to transform China into a global competitor in profitable technologies through nurturing champions in robotics, electric cars and other fields with subsidies and shielding them from competition.

Washington, Europe, Japan and other trading partners say those violate Chinese market-opening commitments and are based on stealing or pressuring companies to hand over technology. Chinese officials retort that they are entitled to develop higher-value industries and have tried to deflect criticism by saying foreign companies might be allowed a role.

Chinese leaders insist on “maintaining their system of economic development. They can’t have that crumble,” said Mercurio.

Xi might feel more confident because, after facing accusations he bungled relations with China’s biggest export market, he has strengthened his political position and silenced critics, said Willy Lam, a politics specialist at the Chinese University of Hong Kong.

A year ago, Xi felt threatened enough that he was “anxious to get this over with,” said Lam. But now, he has gathered support and “can dig in for the long haul.”

That would mark a return to Beijing’s traditional “war of attrition” strategy of holding out — for a decade or more, if needed — to get what it wants from the United States, Europe and other partners.

China spent 12 years, longer than any other government, negotiating its 2001 entry into the World Trade Organization.

Eighteen years later, it still is dickering over terms for joining the Government Procurement Agreement, which extends WTO free-trade principles to official purchases.

In a sign Beijing might be digging in, two veteran trade envoys — Commerce Minister Zhong Shan and one of his deputies, Yu Jianhua — were added in July to the delegation led by Vice Premier Liu He. Liu is Xi’s economic adviser but has little experience in negotiations.

The government has told exporters to find new markets and replace American farm goods with imports from Russia, Brazil and other sources.

Xi also might be looking to the U.S. political calendar for leverage — a possibility Trump cited when he accused Beijing in July of stalling in hopes he would fail to win re-election next year.

Xi might not want to wait that long, because support in Washington for action against Beijing crosses party lines, say political analysts. But they said Chinese leaders might hope as Trump’s campaign picks up, he will need a settlement to burnish his status as a trade warrior.

“Trump will want deals to show to the public,” said ING’s Leering. He said without that, Trump’s track record of agreements with Canada, Mexico and South Korea looks “pretty meager” for a leader who made trade a cornerstone of his 2016 election campaign.

That means “in the end, the U.S. will be prepared to give in a bit more,” he said.

China also might be holding out for a deal that lets it keep subsidizing technology industries and “cheating on intellectual property,” said Lam. That might include retaining leverage to pressure foreign companies to give or license technology at low prices to Chinese competitors.

Letting the yuan slide to an 11-year low against the dollar on Aug. 5 reflects another traditional Chinese strategy: Showing an opponent that China can endure painful losses to get what it wants.

A weaker yuan would make Chinese exports cheaper abroad and help to offset Trump’s tariff hikes. But economists warn a further decline will harm Chinese banks, construction companies and others that have hundreds of billions of dollars in foreign debt by making that more expensive to repay.

In the meantime, the rising tensions over trade have dimmed Americans’ opinions of China. A Pew Research Center poll released Tuesday found that 60% of Americans said they held an unfavorable view of China — up from 47% last year to the highest proportion since Pew started asking the question 14 years ago. 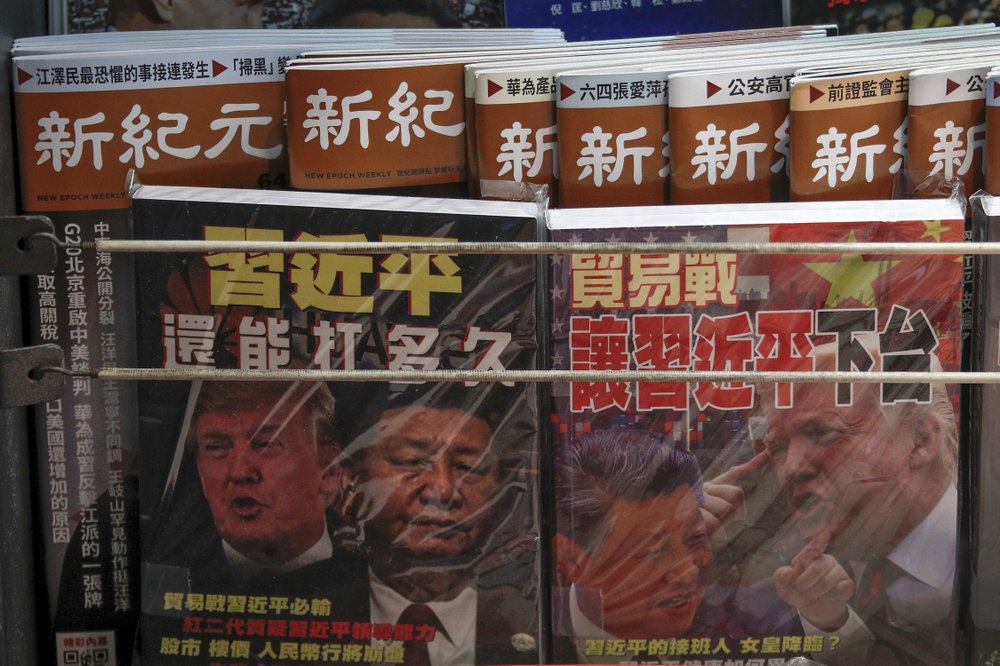 In this July 4, 2019, photo, Chinese magazines with front covers featuring Chinese President Xi Jinping and U.S. President Donald Trump on trade war is placed on sale at a roadside bookstand in Hong Kong. Facing another U.S. tariff hike, Xi is getting tougher with Washington instead of backing down. Both sides have incentives to settle a trade war that is battering exporters on either side of the Pacific and threatening to tip the global economy into recession. (AP Photo/Andy Wong)