Here are the top trucking trends that all shippers should be aware of, according to the American Transportation Research Institute.

Where Things Stand and What Shippers Can Expect

Coming into 2019, issues like the tariff wars, driver shortage, and rising freight rates were high on transportation managers’ radar screens.

Some of those issues prevailed this year, others lessened in importance, and still, others reared their heads as 2019 progressed.

Here’s where things stand and what shippers can expect as we move into the fourth quarter of the year and start to look ahead to the transportation environment in 2020:

A perennial top industry issue, the driver shortage ranked as the industry’s top concern for the second consecutive year in 2018, according to the American Transportation Research Institute (ATRI).

The concern hasn’t waned at all in 2019 (ATRI Critical Issues in the Trucking Industry – 2019). Growing demand for truck transportation over the past year has exacerbated industry capacity constraints as carriers continue to struggle with recruiting and retaining a qualified truck driver workforce.

The current driver shortage, which the American Trucking Associations (ATA) estimates to be over 50,000 drivers, and the competitive freight market have served to boost driver pay, benefits, and bonuses over the past year.

Related: Is There a Truck Driver Shortage or a Utilization Crisis?

Freight Rates Have Leveled Off (and even retreated, in some cases)

National van rate averages are at $1.81 per mile, three cents lower than the July average. The Midwest is the leader with van rates averaging $2.00 per mile, and the lowest average rates are in the Northeast at $1.61 per mile. Reefer freight rates continue to drop, with a current national average of $2.14 per mile.

Despite hints of a possible recession on the horizon, the U.S. economy remains strong in 2019. The U.S. economy expanded by 2.1% during the second quarter of the year, compared with 4.2% during the same period in 2018, and a 3.1% expansion in the first quarter, which mostly was buoyed by lower imports and higher inventories, JOC reports.

Gross domestic product (GDP) slowed to 2.1% in the second quarter of 2019 but beat expectations thanks to strong consumer spending, CNBC reports. Consumer and government spending helped propel GDP in the April-to-June period, while a pullback in business investment negatively impacted the measure. Personal consumption expenditures rose 4.3%, the best performance since the fourth quarter of 2017.

Some Small Carriers Are Closing Up Shop

Terrill Transportation Inc. of Livermore, California, ceased operations on July 30. Terrill Trucking had 30 trucks and 36 company drivers. It also had 12 owner-operators. The following month, HVH Transportation, a midsized firm with 344 tractor units and 324 drivers on its payroll, also ceased operations. The Denver-based firm operated in all states west of the Appalachian Mountains. 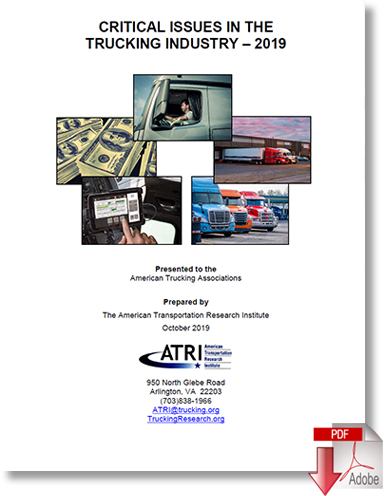 The Hours-of-Service (HOS) Rules Are Changing

According to ATRI, HOS was a top-three industry issue for the eighth consecutive year in 2018, as the final implementation of FMCSA’s ELD mandate in December 2017 has underscored the industry’s desire for increased flexibility in the current HOS provisions. Starting December 16, 2019, all carriers and drivers subject to the ELD rule must use ELDs. The rule applies to motor carriers and drivers who are currently required to keep records of duty service (RODS) under the hours-of-service (HOS) regulations.

According to the FMCSA, drivers who use the time card exception, and don’t keep a paper record of duty status (RODS), will not be required to use ELDs. As it continues to adjust the rule, the FMCSA proposed some “tweaks” in 2019, including the ability to split up the required 10-hour break from driving into one break of at least seven hours in the sleeper berth and another break of no less than two hours spent either off duty or in the sleeper berth.

That means drivers will now be allowed to fulfill their 30-minute break requirement with “on-duty, not driving status,” which is any time the driver is working but not driving, so time spent loading freight or doing paperwork could count.

Driver Detention Becoming a Bigger Issue for Drivers and Carriers

According to a new report from the American Transportation Research Institute (ATRI), the frequency and length of time that drivers have been detained at customer facilities have both increased over the last four years. While there is no industry-standard definition of “excessive detention,” in Driver Detention Impacts on Safety and Productivity, ATRI says that it’s generally accepted within the trucking industry that any delay over two hours is reasonably defined as excessive.

Significant detention times at shipping and receiving facilities can create a number of challenges for trucking operations, including interruptions to otherwise tight schedules and inefficient use of equipment and labor.

The Tariff War Is Impacting Commerce

According to Business Insider, the trade war has negatively impacted U.S. factory activity, which fell in August for the first time since January 2016. It says the measure receded to 49.1 last month (a reading below 50 typically indicates that growth in the manufacturing sector is weakening) as the U.S. and China both slapped fresh tariffs on billions of dollars’ worth of imports.

For example, the latest round of tariffs that went into effect over Labor Day weekend placed additional import taxes on smartwatches, fitness trackers, desktop computers, digital cameras, and lithium batteries. This latest round impacts about $52 billion worth of consumer goods.

Download the Research: Critical Issues in the Trucking Industry – 2019