Amazon.com’s Prime Air fleet will grow to about 200 planes, up from 42 now, in the next seven or eight years, creating an air cargo service that could rival United Parcel Service Inc. and FedEx Corp., according to a recent study.

As reported by Bloomberg, Amazon.com Inc.’s Prime Air fleet will grow to about 200 planes - up from 42 now - in the next seven or eight years, creating an air cargo service that could rival United Parcel Service Inc., according to a study by DePaul University’s Chaddick Institute of Metropolitan Development.

“At a time when many other airlines are downsizing due to the pandemic, Amazon’s push for faster and cheaper at-home delivery is moving ahead on an ambitious timetable,” said the report.

“Amazon Air’s robust expansion makes it one of the biggest stories in the air cargo industry in years.”

Amazon unveiled the air cargo service in 2016, prompting speculation that it would ultimately create an overnight delivery network to rival delivery partners UPS and FedEx Corp.

Prime Air operates out of smaller regional airports close to its warehouses around the country, helping Amazon quickly move inventory to accommodate one- and two-day delivery.

For that reason, some analysts have dismissed Amazon as a potential competitor to UPS and FedEx since it can only offer limited service to a small number of destinations and seems designed to handle Amazon packages.

Key to its ability to take on the entrenched players, the report says, is Amazon’s new $1.5 billion facilities near Cincinnati that will accommodate up to 100 planes and as many as 200 flights each day.

Amazon’s lack of a central hub has kept it from competing in the overnight delivery services offered by UPS and FedEx, which have more planes flying to more destinations.

“The massive investment being made in a large hub at Cincinnati/Northern Kentucky International Airport, however, could change everything,” the report says. 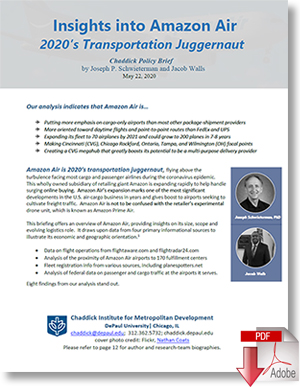 “This hub appears to be the linchpin to Amazon’s efforts to develop a comprehensive array of domestic delivery services.”

“The growth of Amazon Air is a cornerstone of the retailer’s push to expand its presence in the overnight and two-day home delivery market, a segment that has long been dominated by FedEx, UPS, and the United States Postal Service, Amazon Air’s orientation, however, differs from these more established carriers in several notable ways.”

A separate report from Bernstein analyst David Vernon released Monday noted Amazon’s lack of a central hub in concluding it was not a competitive threat to FedEx, which has a hub in Memphis, or UPS, which has one in Louisville.

“Offering a low cost on shipping to a small number of markets every so often will never be a serious competitive threat.”

What FedEx, UPS, and the e-commerce giant are doing reflects how all firms are rethinking how to deliver goods.

As Amazon builds out its own parcel delivery system - the company now has 40-50 planes, more than 20,000 vans, and is even testing robot delivery - there will eventually come a point when it decides to either build the business organically by opening it up to other companies or buy one of its competitors.

“Both FedEx and UPS recognize that Amazon is now, foremost, a competitor,” says Bernhard Raschke, head of the Supply Chain Center of Expertise in EMEA for Korn Ferry.