FedEx (NYSE:FDX) stock hit a new all-time high above $185 last month, before the company reported earnings for the final quarter of its 2015 fiscal year. However, the stock has pulled back by more than 7% from that high as FedEx's revenue and EPS fell a bit short of analysts' expectations. 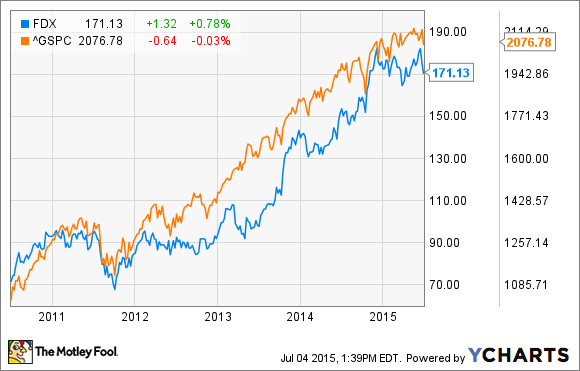 That said, after sitting out of the stock market's rally during 2011 and 2012, FedEx stock has roughly doubled since the beginning of 2013. Furthermore, FedEx management tried to reassure investors following the recent earnings report that there is plenty of earnings growth ahead for the package delivery giant. Here are five key points emphasized by the FedEx team.

Capital expenditures are going to increase in FY2016 to approximately $4.6 billion. The increase from FY2015 is largely due to a higher investment and the continued expansion of the Ground network.
-- FedEx CFO Alan Graf

FedEx Ground achieved this rapid growth mainly through organic investment, supplemented by acquisitions. FedEx has invested heavily in the Ground business lately to benefit from the long-term growth of e-commerce.

FedEx Ground is spending heavily to expand its network. Photo: The Motley Fool

CapEx for the Ground segment was just $555 million two years ago, spiking to $1.25 billion in FY15. FedEx Ground CEO Henry Maier said that the Ground capital budget is $1.6 billion for FY16. However, these investments are expected to generate returns quickly, and Maier expects FedEx Ground capital spending to decline about 30%-35% from this peak in FY17.

In the Ground segment, Ground yields per package ... increased 4.3% year-over-year, excluding the fuel surcharge, driven primarily by the change in the dimensional weight surcharge and changes in weight and other surcharges.
-- FedEx EVP of Market Development and Corporate Communications, Mike Glenn

At the beginning of the calendar year, FedEx implemented a dimensional weight surcharge for the Ground business. Pricing now depends on package size in addition to weight. This means that customers are charged more for bulky packages -- which take up more space in FedEx's trucks -- than for compact packages of the same weight.

These new charges are driving an increase in revenue per package in the Ground segment. However, FedEx also expects dimensional weight pricing to encourage customers to improve their packaging to use less space. That will drive higher efficiency at FedEx, since it will be able to fit more packages on each truck.

With the profit improvement initiatives at Express continuing to gain traction throughout the year, we project much stronger profitability growth in the second half of the year.
-- Alan Graf

However, that EPS growth will be back-loaded. FedEx CFO Alan Graf told investors that the analyst consensus for Q1 EPS -- which stood at $2.65 in early June -- was too high, due in part to a jump in incentive compensation. But tailwinds from FedEx's profit improvement program and aircraft maintenance costs will drive a return to strong profit growth in the second half of FY16.

FedEx has moved aggressively to update the FedEx Express aircraft fleet in the past few years. It has retired older aircraft -- particularly three-engine planes -- in favor of a mix of used and new twin-engine planes.

FedEx is retiring three-engine planes like this MD-11. Photo: The Motley Fool

FedEx will continue this process in FY16. It plans to retire 19 older planes, including eight MD-10s -- a three-engine plane developed in the 1960s -- replacing them with 13 new planes from Boeing. This will reduce FedEx's fuel and maintenance costs. CEO Fred Smith also noted that FedEx can make do with fewer new planes -- thanks to their higher reliability, FedEx doesn't need as many spares.

... [W]e have a piece of software that's going to be released this summer which will allow us to match addresses in the network between SmartPost and FedEx Home Delivery. When we get two packages going to the same address, we're going to divert that SmartPost into HD for delivery.
-- FedEx Ground CEO Henry Maier

Finally, an upcoming software tool could drive acceleration in FedEx Ground's earnings later in FY16 and throughout the following year. Today, FedEx operates its SmartPost service -- which provides low-cost shipping to residential addresses using the Post Office for final delivery -- separately from the rest of FedEx Ground.