Some Shipping Companies Gain an Edge During Holidays

Peak season usually is the most wonderful time of the year for shipping companies thanks to a surge in holiday orders. But this year, it is highlighting the growing gap between the transportation industry’s haves and have-nots.

Peak season was a no show for railroads, truckers and ocean carriers—a time when incoming containers to ports in the fall can rise as much as 15%, according to Hackett Associates.

But for those specializing in online holiday shipping— FedEx Corp. , United Parcel Service Inc., the U.S. Postal Service and Deutsche Post AG ’s DHL—their peaks are yet to come, and they are expecting big ones.

That is because of a stark disconnect between online and brick-and-mortar shopping expectations this year. Physical retailers are sitting on near record-high inventories as consumer spending hasn’t yet caught up with hopes of a surge stoked by low gasoline prices. They are also employing new methods of inventory management for the holidays, including shipping items sold online from some stores and stocking fewer goods in others as they attempt to better predict rapidly shifting consumer demand, resulting in more packages. 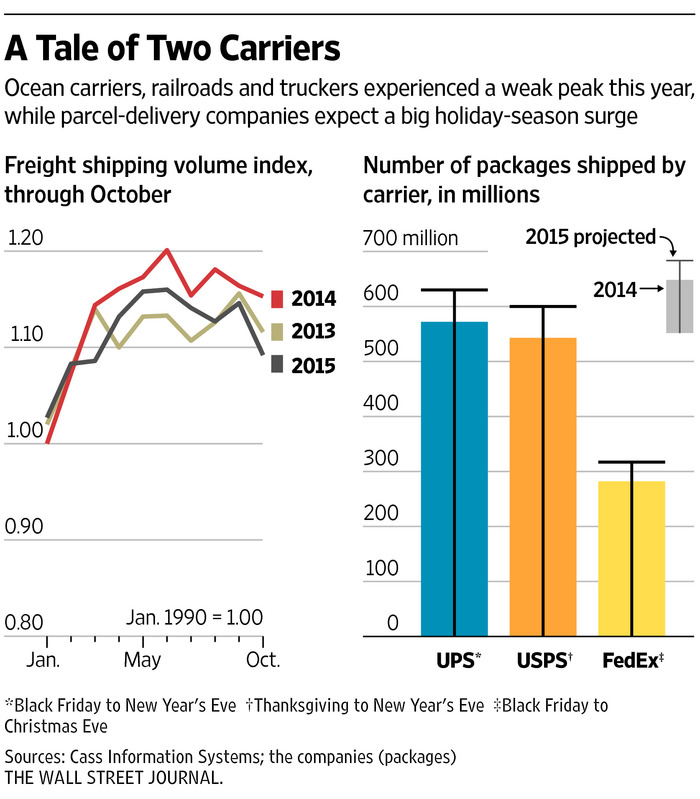 The Cass Freight Index report, which tracks North American freight shipping volumes, fell 1.5% in September from the year earlier, and is below September readings going back to 2011. It fell 5.3% year-over-year in October.

“I think the low growth has taken everybody by surprise,” CEO Nils Andersen on Mærsk’s earnings call earlier this month. “At least it was below what we expected and definitely did not meet our hopes for the peak season.”

Peak volumes on the rails have “been muted,” Lance Fritz, CEO of railroad company Union Pacific Corp. , said in an interview. “I don’t know what to expect out of consumers going into the holiday season.”

That is a big difference from UPS, which predicts its deliveries will increase 10% to a record 630 million packages between Black Friday and New Year’s Eve, compared with last year. The U.S. Postal Service announced earlier this month it expects to deliver 600 million packages during the same period, an increase of 11% from last year, while FedEx has said it would deliver 12% more packages from last year, or 317 million, between Black Friday and Christmas Eve.

Retailers have painted a mixed picture so far for the holidays, with some mall-based chains issuing warnings on weak consumer spending, and other big-box stores including Wal-Mart Stores Inc. and Home Depot Inc. reporting rising sales. Amazon.com Inc. said it expected its fourth-quarter sales to grow between 14% and 25%.

“Obviously the economic news has been mixed, but at the end of the day—even on the consumer side—you see a larger, faster paced strength in the e-commerce space as compared to retail,” said UPS Chief Financial Officer Richard Peretz in an interview.

DHL Express, which in the U.S. primarily handles international shipments, expects its peak season volumes there to be more than 40% higher than its average daily volume in the third quarter. Its busiest day is forecast to be Dec. 22, when the company expects to deliver 250,000 shipments from around the world arriving in the U.S.

Already, October was the company’s biggest month ever for U.S. inbound delivery volume, and November hasn’t slowed down, said DHL Express U.S. CEO Mike Parra in an interview. “I think it’s all associated with the strengthening of the dollar,” Mr. Parra said, adding that the company’s growth was driven by e-commerce. 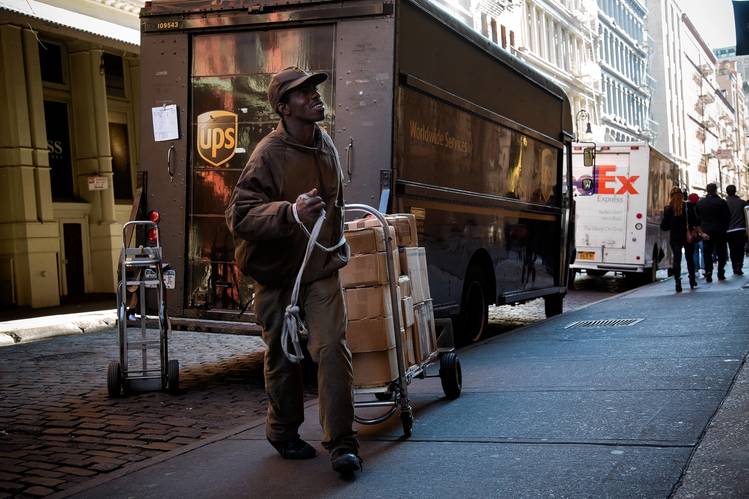 Online holiday sales will grow as much as 8% this year, compared with 5.8% a year ago and flat retail sales overall, according to the National Retail Federation.

In addition, retailers are changing the way they manage that inventory, according to both retail and delivery experts. Instead of stocking 50 sweaters at each store, some retailers will keep just 10 on hand, leaving the rest at a centralized distribution center that also fills online orders. When that store runs out, it will order 10 more for just-in-time restocking, and UPS or FedEx will get it to the door.

At other store locations, retailers are stocking up to use those as mini distribution hubs, employing holiday workers to pick and pack that same sweater for pickup by a delivery man for shipment to an online shopper.

DHL’s Mr. Parra said that more retailers are stocking up via smaller airfreight orders from international suppliers, a method they discovered was more cost effective than expected during a slowdown of the West Coast ports last year. “There’s no need for having large inventories sitting in brick-and-mortar stores,” he said.

Retailers are currently working toward full visibility of every item in stock, in stores and distribution centers, in real time, said Steve Osburn, a supply chain consultant with Kurt Salmon. While it’s a work in progress, “ultimately the long term play is if you get better use of inventory, you don’t have to carry as much inventory,” he said.