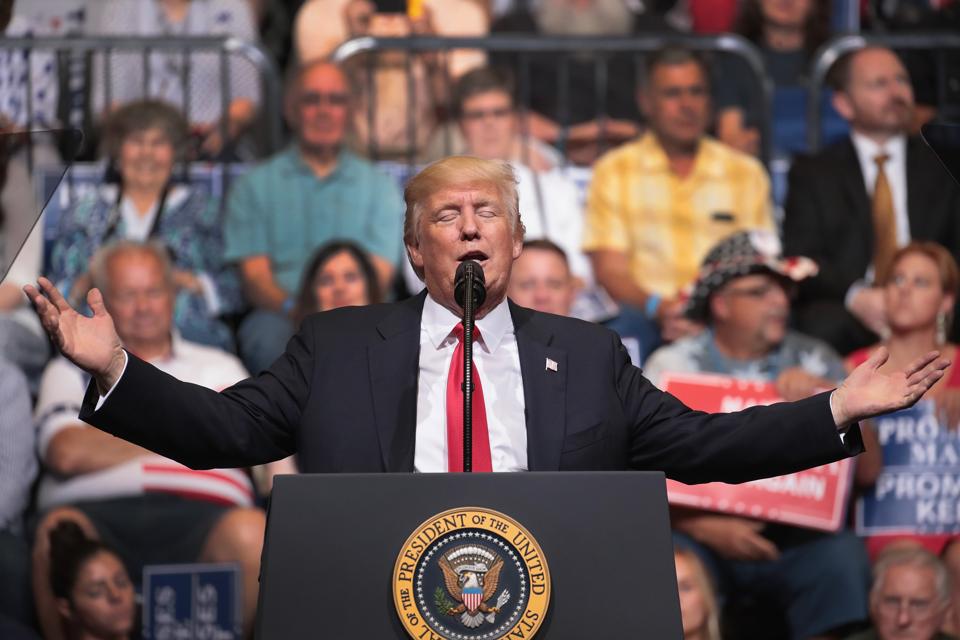 President Trump, speaking at a rally last week in Iowa, talked about renegotiating NAFTA and building a border wall with Mexico that would produce solar power. ( by Scott Olson/Getty Images)

I was thinking about the three-day NAFTA hearings just completed in Washington as WorldCity, the company where I serve as president, was putting the finishing touches on an annual publication, Dallas-Fort Worth TradeNumbers, which looks at how the Texas airport trades with the world.

We had just completed one for Port Everglades, the seaport in Fort Lauderdale, Fla. A few weeks prior, we had produced another annual, U.S. TradeNumbers, which, as the name suggests, looks at how the United States trades with the world. (Download free PDFs available here.)

In the one for DFW, the map highlights the top 20 U.S. airports, with their rank, total trade, total exports, total imports, the surplus or deficit, and the changes from the previous year. Port Everglades has a similar map comparing it to the leading U.S. seaports. In U.S. TradeNumbers, we rank the top 20 gateways, regardless of whether they are an airport, a seaport or a border crossing.

Which leads me to the NAFTA hearings. While we have all learned that President Trump often speaks in hyperbole, we began down this path when then-candidate Trump called it "one of the worst deals, ever," "a disaster for our country" and more. Once elected, he announced his intention to renegotiate the treaty which, after more than two decades, ultimately came to be viewed as reasonable by even the most ardent supporters of the agreement.

Earlier this year, when the Office of the U.S. Trade Representative asked for comments from the public, there were so many -- some 12,000, according to an article in the Wall Street Journal -- the server crashed. More than 140 people signed up to speak during the three-day hearings, representing a wide variety of industries, from footwear to strawberries, automotive to cattle, grocery to tile, motion pictures to telecommunications.

There is a lot at stake. What the three maps in our TradeNumbers publications showed is that U.S. trade occurs in almost equal measure by land, by sea and by air. There are key differences, differences that are particularly interesting given the NAFTA hearings held in Washington this week.

Generally speaking, a great deal of that land-based trade is border trade with Canada and Mexico, the nation’s second and third-largest trade partners, respectively, after China. Air trade tends to be more focused on Europe and Asia as well as, to a lesser extent, South America and Africa. Ocean trade is similar to air trade, but with a stronger pull toward Asia, including China.

So here's the first point: About one-third of all U.S. trade is with just two countries. To the surprise of many, the second-most-import gateway for U.S. trade, after the Port of Los Angeles, is generated by the truck traffic crossing the World Trade Bridge in Laredo, Texas. (Traffic across another bridge and rail traffic are included.)

If you are opposed to touching NAFTA, or at least leery of messing up a good thing, you say: Find some of the additional protections and provisions sought in NAFTA in the at-least-temporarily-defunct Trans Pacific Partnership agreement -- unrepentant optimist, I am -- which Trump scuttled on the first day of his presidency. If you are in favor of taking a good, hard look at NAFTA, you say: It's too important not to have a good, hard look.

Here's a second point: The United States’ land-based trade is also the most balanced. Here, it's hard not to side with the "don't mess up a good thing" camp.

For every dollar of U.S. trade done over land, more than 46 cents is a U.S. export. Fifty cents would be parity; anything above 50 cents would represent a U.S. surplus.

Granted, we have a large (but shrinking) deficit with Mexico and used to have a large one with Canada until the price of oil plummeted. (Canada is overwhelmingly the United States' top foreign provider of oil.) But with the volume of trade occurring with the two nations, it is helpful to look at the balance, the percentage that is an export. The United States exports an extraordinary amount to both Canada and Mexico.

A third point: We also have the smallest trade deficit in land-based trade: $101.37 billion. That compares to $505.11 billion for ocean-borne trade and $128.98 billion for air cargo. Again, advantage to the "don't mess up a good thing" crowd.

Forgetting for a moment all the excellent arguments made in Washington over the last three days about the high cost of disrupting intricate supply chains and about the growing export markets for U.S. farmers, particularly in Mexico. The data is pretty clear. U.S. trade with the world might not be perfect, and NAFTA trade might not be either, but it's about the best trade the United States has. Tread softly.