Promising practices show potential for change, but jewelry and watch companies still need to do more to ensure that their supply chains are free of human rights abuse.

Jewelry and watch companies need to do more to ensure that their supply chains are free of human rights abuse, Human Rights Watch said in a report released today, ahead of Valentine’s Day.

In addition, 29 civil society groups and trade unions jointly appealed to the jewelry industry to improve its sourcing practices.

The 99-page report, “The Hidden Cost of Jewelry: Human Rights in Supply Chains and the Responsibility of Jewelry Companies” scrutinizes the sourcing of gold and diamonds by 13 major jewelry and watch brands that collectively generate over US$30 billion in annual revenue – about 10 percent of global jewelry sales.

The report also describes the abusive conditions under which precious minerals and metals are sometimes mined. Children have been injured and even killed doing hazardous work in small-scale gold or diamond mines. Communities have faced ill-health and environmental harm because mines have polluted waterways with toxic chemicals. And civilians have suffered enormously as abusive armed groups have enriched themselves through mining.

“Many jewelers can do more to find out if their gold or diamonds are tainted by child labor or other human rights abuses,” said Juliane Kippenberg, associate child rights director at Human Rights Watch. “When someone buys a piece of jewelry for their loved one this Valentine’s Day, they should ask their jeweler what they have done to find out about its origin.”

Human Rights Watch has done extensive research in numerous countries where abusive practices, especially against children, taint the supply chain. In one 2015 report from the Philippines, a 16-year old boy described how he goes underwater biting an air hose to search for gold, at risk of drowning.

Precious minerals and stones are mined in dozens of countries around the world, and then typically traded, exported, and processed in other countries. Although their supply chains can be long and complex, jewelers and watchmakers have a responsibility to ensure that their operations do not contribute to human rights abuses at any point along those chains.

Human Rights Watch found that most of the 13 jewelry companies fall short of meeting international responsible sourcing standards. Under the United Nations Guiding Principles on Business and Human Rights, businesses should put in place safeguards known as “human rights due diligence” – a process to identify, prevent, address, and account for their impact on human rights throughout their supply chains. The Organisation for Economic Co-operation and Development (OECD) has developed this approach further in its “Due Diligence Guidance for Responsible Supply Chains of Minerals from Conflict-Affected and High-Risk Areas,” the leading due diligence standard for minerals.

The practices of the 13 jewelers Human Rights Watch examined differ significantly. While some companies have taken important steps to address human rights risks in the gold and diamond supply chain, others simply rely on the untested assurances of their suppliers. Most of the companies do not have full traceability for their gold and diamonds and do not sufficiently assess human rights risks. Most of the companies also do not provide comprehensive public reports on their responsible sourcing efforts, nor do they publish the names of their suppliers. 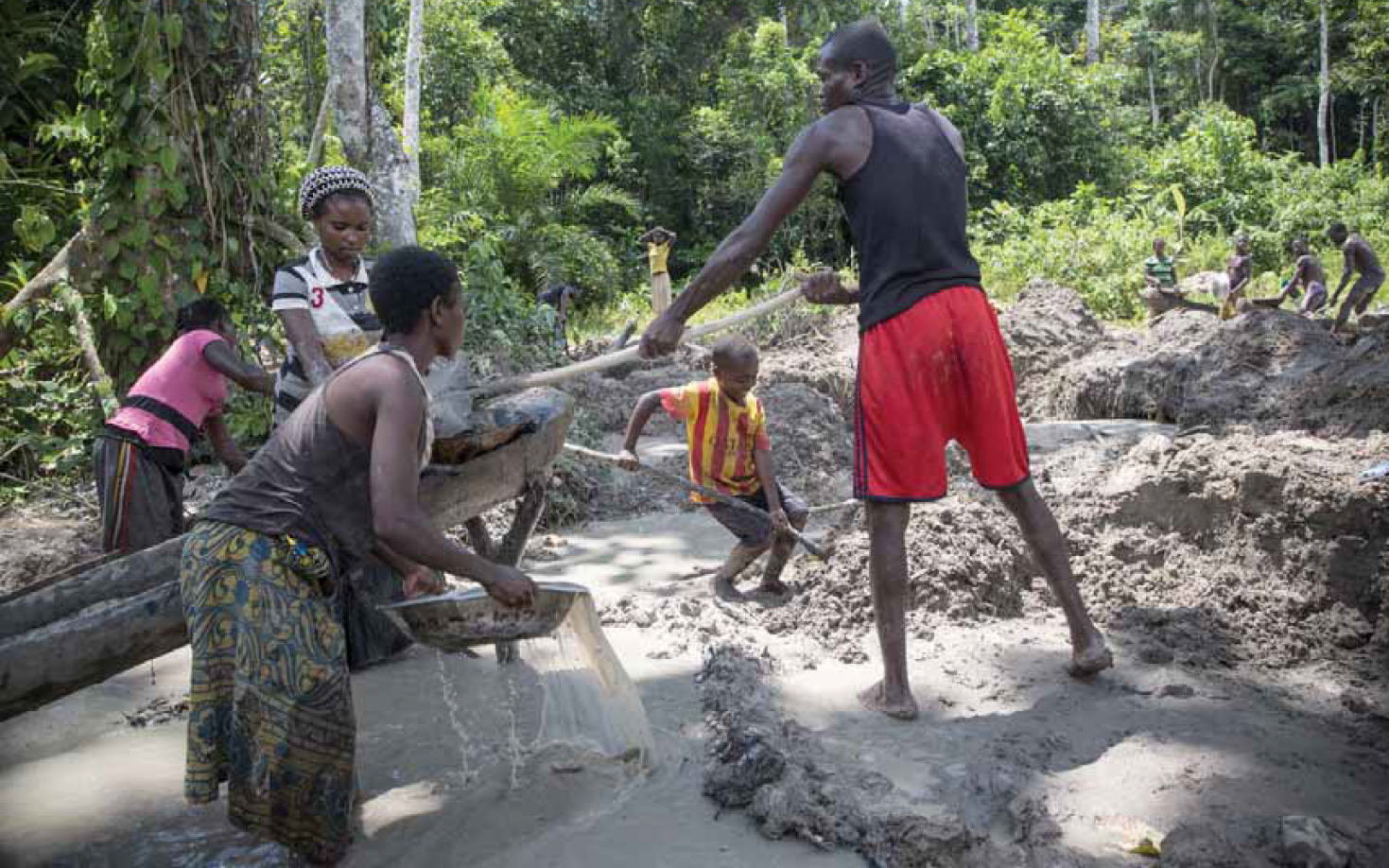 An artisanal diamond mine in Sosso-Nakombo, near the border with Cameroon. Seleka rebels have withdrawn from this part of the country, but fighters for anti-Balaka militias and bandits often prey on the miners. Photo: Marcus Bleasdale

Ten of the companies responded to the request for information: Boodles, Bulgari, Cartier, Chopard, Christ, Harry Winston, Pandora, Signet (parent company of Kay Jewelers, Zales, Ernest Jones, and H. Samuel), Tanishq, and Tiffany. Three did not respond Kalyan, Rolex, and TBZ. Based on information publicly available or provided by the companies, Human Rights Watch ranked the 13 companies according to specific responsible sourcing criteria, including efforts to assess and respond to human rights risks, establish traceability, and publicly report about the company’s actions.

Four others – Boodles, Chopard, Christ, and Harry Winston – were ranked as “weak” for taking few steps toward responsible sourcing, and Tanishq as “very weak,” due to a lack of any evidence of steps towards responsible sourcing. The three companies that did not respond were not ranked because they do not disclose any information regarding their sourcing policies and practices.

Human Rights Watch also found that existing initiatives on responsible sourcing, such as the Kimberley Process for diamonds, and certification by the Responsible Jewellery Council, do not by themselves provide sufficient assurance that diamonds or gold have been mined without contributing to abuse. The Kimberley Process is focused narrowly on diamonds linked to rebel forces, applies only to rough diamonds, and places no direct responsibility on companies.

The Responsible Jewellery Council, an industry group with over 1,000 members, has flawed standards, governance, and certification systems. The council should strengthen its standards and auditing practices to set a higher bar for responsible sourcing practices by the industry, Human Rights Watch said.

“Too many companies point to their membership in the Responsible Jewellery Council as being all the proof they need of responsible sourcing, but this is not enough to truly ensure clean supply chains,” Kippenberg said.

While many jewelry companies fall short of meeting international standards, some have adopted good practices that could be more widely replicated. Among the companies examined, Tiffany and Co. stand out for its ability to track its gold back to the mine, and for its thorough assessments of human rights impacts. Cartier purchases the entire output of a “model” gold mine in Honduras. The Swiss jeweler Chopard has worked with small-scale mining cooperatives in Latin America to improve working conditions, and sources from those mines. Pandora stands out for disclosing human rights risks identified during its audits.

A growing number of small jewelers are making efforts to source their gold from small-scale mines where rights are respected, often with the assistance of nongovernmental organizations.

“It is heartening to see that some jewelry companies, small and large, are taking steps in the right direction,” Kippenberg said. “Their actions show that change is possible.”

When purchasing jewelry, customers should ask where the jewelry comes from and what steps the retailer has taken to find out if human rights are respected in the mines of origin, Human Rights Watch said. Artisanal and small-scale mining, in particular, has the potential to benefit local communities.

“An increasing number of customers want to be sure the jewelry they buy has not fueled human rights abuses,” Kippenberg said. “Jewelry companies owe it to their customers and to the communities affected by their businesses to source truly responsibly and allow public scrutiny of their actions.”